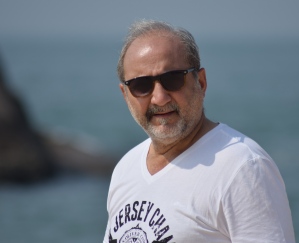 Mahesh Sharma (b Jammu 1963)  was attracted towards art from his childhood. Mainly self taught, he was guided by his teachers and a leading artiste of Jammu during the school days and encouraged by his mother. He graduated in mechanical engineering from NIT, Kashmir.  During vacations he would visit galleries in Delhi and view works of masters as well as contemporary artistes. In 1984 he was convinced by his friend to join Triveni Kala Sangam where noted artistes guided young talent through short term courses. Through his college years, he was associated with Spic Macay, College Photographic and the Drama clubs experiencing  various forms of creative expression. Print making attracted him and he learnt serigraphy in his home town Jammu. The turning point in his artistic journey was his initiation into Shaktipat way of meditation when he started creating original works.

His paintings are inspired greatly from nature. He paints through his imagination and from memory of his experiences. Although he has left printmaking, yet its tools subconsciously influence the way his works are developed. In the pages here, one may see the various styles and practices the artist developed in the last few years; each one being unique in treatment and outcome.

He has been painting actively since the year 2006. His works have been selected for participation in the Annual State Art Exhibitions of the Jammu & Kashmir Academy of Art, Culture and Languages in the years 2008-09, 2009.-10, 2010–11, 2012-13. He has participated in the India Art Festivals in the years 2016 and also in 2017 when he was represented by Galerie Art Eterne. He has organized and partcipated in shows displaying his works in the Lalit Kala Akademi (New Delhi), AIFACS (Confluence ’16 and ’18), Artizen Art Gallery (Pearey Lal Bhawan), Shanta Art Gallery, Art Junction, The Lalit Hotel, the Janpath Subway (art at public places organized by NDMC), Literature Fest at Noida Golf Club, Indira Gandhi National Centre for the Arts and other noted spaces in Delhi. His works are available on several leading online galleries/portals, select Delhi based galleries and also directly through him.

There is a pleasure in the pathless woods,
There is a rapture on the lonely shore,
There is society, where none intrudes,
By the deep sea, and music in its roar:
I love not man the less, but Nature more

One thought on “About the Artist”